An election happened on November 3, 2020 to elect a Senator from the U.S. state of Illinois. The main two people in the election were Dick Durbin (Democratic Party) and Mark Curran (Republican Party). Durbin won the election and stayed as Senator.

Primary elections happened on March 17, 2020. There was only one person in the Democratic Party primary, Dick Durbin, so he won. There were many people in the Republican Party primary, and Mark Curran won. The Libertarian Party chose Danny Malouf for the election. The Green Party chose David F. Black. Willie Wilson was also in the election from his party, the Willie Wilson Party. 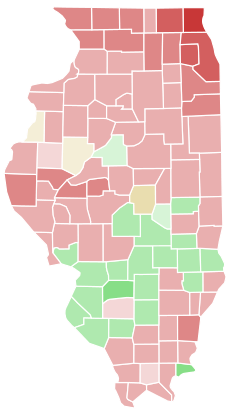 All content from Kiddle encyclopedia articles (including the article images and facts) can be freely used under Attribution-ShareAlike license, unless stated otherwise. Cite this article:
2020 United States Senate election in Illinois Facts for Kids. Kiddle Encyclopedia.