An election happened on November 3, 2020 to elect a Senator from the U.S. state of Mississippi. The main two people in the election were Cindy Hyde-Smith (Republican Party) and Mike Espy (Democratic Party). Hyde-Smith won the election and stayed as Senator.

Primary elections happened on March 10, 2020. There were three people in the Democratic Party primary: Mike Espy, Tobey Bartee, and Jensen Bohren. Espy won this primary. Only Cindy Hyde-Smith was in the Republican Party primary as she was already a Sneator. The Libertarian Party chose Jimmy Edwards for the election. 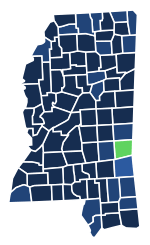 All content from Kiddle encyclopedia articles (including the article images and facts) can be freely used under Attribution-ShareAlike license, unless stated otherwise. Cite this article:
2020 United States Senate election in Mississippi Facts for Kids. Kiddle Encyclopedia.