The 400 State Trail is a 22-mile (35 km) rail trail between Reedsburg and Elroy, Wisconsin. It is designed for foot, bicycle, equestrian, snowmobile traffic. It is designated as a multi-use trail, offering recreational access to the routes, and is open to the public. 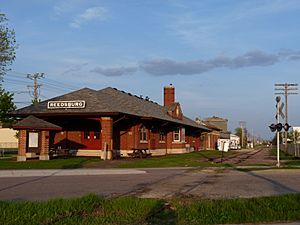 The original railway was constructed by Chicago and North Western Railway (C&NW) around 1873, and was a part of the Twin Cities 400 passenger train which traveled from Chicago to Minneapolis/St. Paul in 400 minutes. This section of railway was not used for the Twin Cities 400, which took the Milwaukee, Beaver Dam, Adams route instead. This track was still used by local industries for many years following the Twin Cities 400. The state acquired the railway after it was abandoned by C&NW in 1988. After renovations, they opened the trail in 1993. The trail's surface is crushed limestone. The 400 Trail is one of four connecting bike trails in west-central Wisconsin that spans approximately one-third of the state. The trail is known for its rural scenery of the Baraboo River which it crosses eleven times. It is part of the larger Wisconsin Bike Trail System, operated by the state of Wisconsin.

The four connecting west central Wisconsin trails, known as the Bike 4 Trails, going from southeast to northwest are:

The trail headquarters is located in a historic depot in Reedsburg and is open from May 1 through October 31. There is a $5.00 per day fee for use of the trail if one does not have the $25.00 yearly Wisconsin bike trail pass. Bike lights are advisable even on the brightest summer days when going into the long unlit tunnels. Camping, lodging, food, parking, bike rentals and information are available at many points along the trail.

All content from Kiddle encyclopedia articles (including the article images and facts) can be freely used under Attribution-ShareAlike license, unless stated otherwise. Cite this article:
400 State Trail Facts for Kids. Kiddle Encyclopedia.