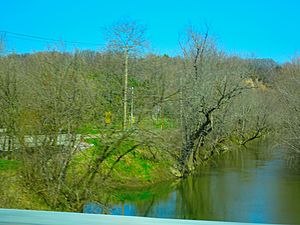 The Baraboo River was probably named after a French trader in the area, Francois Barbeau, although it may also be a corruption of a French word or phrase.

In its upper course above Elroy, the river is paralleled by the Elroy-Sparta Bike Trail.

All content from Kiddle encyclopedia articles (including the article images and facts) can be freely used under Attribution-ShareAlike license, unless stated otherwise. Cite this article:
Baraboo River Facts for Kids. Kiddle Encyclopedia.