Baraboo is a city in and the county seat of Sauk County, Wisconsin, United States. The largest city in the county, Baraboo is the principal city of the Baraboo Micropolitan Statistical Area. Its 2010 population was 12,048. It is situated on the Baraboo River.

Baraboo is home to the Circus World Museum, the former headquarters and winter home of the Ringling Brothers circus. The Al. Ringling Theatre is an active landmark in the city. Baraboo is also near Devil's Lake State Park, the International Crane Foundation, and Aldo Leopold's Shack and Farm.

The area around Baraboo was first settled by Abe Wood in 1838, and was originally known as the village of Adams. In 1846 it became the county seat of Sauk County after a fierce fight with the nearby village of Reedsburg. In 1852, the village was renamed "Baraboo", after the nearby river. It was incorporated as a city in 1882.

Baraboo was the site of several sawmills early in its history because of its location near the Baraboo and Wisconsin Rivers.

The city was the home of the Ringling Brothers. From 1884 to 1917 it was the headquarters of their circus and several others, leading to the nickname "Circus City". Today Circus World Museum is located in Baraboo. A living history museum, it has a collection of circus wagons and other circus artifacts. It also has the largest library of circus information in the United States. The museum previously hosted the Great Circus Parade, which carried circus wagons and performers through the streets of Baraboo, across the state by train, and then through downtown Milwaukee.

The Al. Ringling Theatre is a grand scale movie palace in downtown Baraboo, made possible through the financial assistance of the Ringling family. The Al Ringling home still exists.

Located near Baraboo is the Badger Army Ammunition Plant, which was the largest munitions factory in the world during WWII, when it was known as "Badger Ordnance Works". The plant is no longer in use.

Cirrus Aircraft is the maker of the world's best-selling single-engine aircraft, the SR22, and was the first manufacturer to install a whole-plane parachute recovery system as a standard on all their aircraft—designed to lower the airplane safely to the ground after a loss of control or structural failure. The company was founded in a rural Baraboo barn in 1984 by brothers Alan and Dale Klapmeier to produce the VK-30 kit aircraft. After a few years of designing, they relocated to the Baraboo-Wisconsin Dells Airport and began flight testing, before ultimately moving the company in 1994 to its present-day home in Duluth, MN where they now employ over 1,000 people. 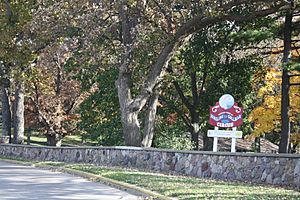 West Baraboo, a suburb of Baraboo, borders the city on its east side.

Baraboo gives its name to the Baraboo Syncline, a doubly plunging, asymmetric syncline in Proterozoic-aged Baraboo quartzite. Researchers at the University of Wisconsin, particularly Charles R. Van Hise, used the syncline to demonstrate that small-scale deformational structures in isolated outcrops reflect larger regional structures and that sedimentary structures could indicate the original top-facing direction within elaborately deformed strata. These two principles sparked a global revolution in structural geology during the 1920s.

The nearby Baraboo Hills are designated one of the "Last Great Places" by the Nature Conservancy because of their rare rocks, plants and animals. The hills were created by glacial action, and in some points poke up from the flat terrain to form a stark contrast. Some of these features were created when a glacial pocket was formed during the Wisconsin glaciation where the advance of the glacier halted, along the edge of what is known as the Driftless Area. Devil's Lake State Park, Wisconsin's largest state park, contains large areas of the Baraboo Hills. Pewits Nest is located outside Baraboo.

There were 5,161 households of which 30.2% had children under the age of 18 living with them, 41.1% were married couples living together, 11.8% had a female householder with no husband present, 5.5% had a male householder with no wife present, and 41.6% were non-families. 34.4% of all households were made up of individuals and 14.7% had someone living alone who was 65 years of age or older. The average household size was 2.26 and the average family size was 2.89.

There were 4,467 households out of which 31.0% had children under the age of 18 living with them, 46.9% were married couples living together, 10.8% had a female householder with no husband present, and 38.8% were non-families. 32.1% of all households were made up of individuals and 13.5% had someone living alone who was 65 years of age or older. The average household size was 2.33 and the average family size was 2.96.

The International Crane Foundation is based in Baraboo. Dedicated to the study and conservation of the world's 15 species of crane, the organization engages in conservation research, public education, and international conservation efforts.

All content from Kiddle encyclopedia articles (including the article images and facts) can be freely used under Attribution-ShareAlike license, unless stated otherwise. Cite this article:
Baraboo, Wisconsin Facts for Kids. Kiddle Encyclopedia.