Devil's Lake State Park is a state park located in the Baraboo Range in eastern Sauk County, just south of Baraboo, Wisconsin. Devil's Lake State Park is the largest state park in Wisconsin. It is around thirty-five miles northwest of Madison, and is on the western edge of the last ice-sheet deposited during the Wisconsin glaciation. This 9,217-acre (3,730 ha) state park is known for its 500-foot-high (150 m) quartzite bluffs along the 360-acre (150 ha) Devil's Lake, which was created by a glacier depositing terminal moraines that plugged the north and south ends of the gap in the bluffs during the last ice age approximately 12,000 years ago. The sand at the bottom of Devil's Lake is thought to be deposited by glaciers.

Its scenic beauty, along with its proximity to the Wisconsin Dells, has made it one of the most popular of Wisconsin's state parks for both day use and overnight camping; the park receives over three million visitors annually. During the fall, the park's brilliant foliage makes it a popular attraction.

The area where the park now stands was first settled by pioneers in the mid-1800s. By the start of the 20th century, the area had become a popular vacation destination for wealthy families from Chicago and Madison. The first hotel was established in 1866, 50 years before the park was founded.

The park was founded in 1911. It was home to five resorts, two of which were perched on the west bluff. No trace of any of these hotels remains. There were also many private residences in the west and south shores of the lake, only four of which remain. At various times the lakeshore hosted water slides, lodges, and golf courses. The clubhouse of one course sat on the current location of the park's nature center. By the 1940s, the hotels were all closed, and the park was retreating to its former natural self.

From 1934 to 1941, approximately two hundred members of the Civilian Conservation Corps resided in a work camp. These young men built many of the trails, buildings, and benches still in use today.

In 1974, the National Park Service declared the Southern portion of the Baraboo Hills a National Natural Landmark. The Nature Conservancy also designated it as one of the Last Great Places; it is one of only 77 of these places in the world.

Loess covers most of the hills and forms the parent material of a brown silt loam soil. The lake is surrounded by a mixed conifer-deciduous forest and the Baraboo Hills are also home to one of the largest contiguous hardwood forests in the Midwest.

North Glacial Moraine is well covered by the north shore developments. The parking lots, concession building and the picnic shelter all sit atop the moraine. This moraine forms the northern border of Devil's Lake. The moraine is approximately 80 feet (24 m) thick.

Southeast Glacial Moraine is located between the East Bluff-South Face and the South Bluff. The Group Camp is located atop the moraine. It is best seen from the Roznos Meadow parking area along State Route 113. The moraine is approximately 130 feet (40 m) thick.

Due to the long geological history of Devil's Lake and the Baraboo Range, the area has been used in geological research for years. The lake itself is rectangular in shape and is a little over a mile long from north to south and a half mile from east to west. It has many cliffs, unique rock formations and a variety of animal and plant species. One of the most notable features of the park is the presence of large talus slopes on three sides of the lake.

The visitor center houses a three-dimensional model of the park from a top-down view. Both the north and south shores have food courts and modern restroom facilities. 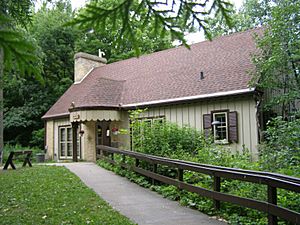 The exhibits at the park's nature center focus on the geology and natural history of the area. Public nature programs are offered in the summer, as well as evening programs on Saturday nights in the Northern Lights Amphitheater. The nature center also has many historical photographs that come from as far back as the 1800s. They also have many displays of examples of the flora and fauna that can be found throughout the park.

The park has several American Indian mounds. Across the parking lot from the nature center are effigy mounds built in stylized animal shapes, such as a lynx and a sparrow. In front of the concession building is a linear mound, one of several geometric mounds in the park. These mounds were used as ancient burial sites by early North Americans. The nature center offers courses on the history of the effigy mounds.

The park has trails ranging from handicapped-accessible paved trails to difficult hiking or bouldering trails. There are 41 miles (66 km) of hiking trails in the park. The highest point is 500 feet (150 m) above Devil's Lake. There are also bike trails available. Devil's Lake State Park contains eight miles of off-road bike trails and a two-mile paved path that is available for people with disabilities. There are three popular campgrounds at the park containing 407 campsites all together, one of which contains a sledding hill. 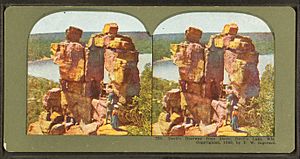 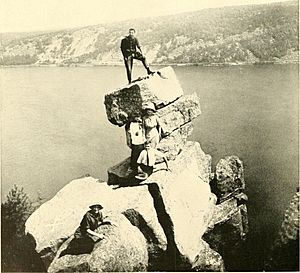 The geology of the Baraboo Hills surrounding Devil's Lake makes it one of the premier rock climbing areas in the Midwest, with climbs of varying difficulty. The Baraboo Hills are primarily quartzite, which is solid enough to climb. Most outcroppings in the region, especially in the Driftless Area, are composed of sandstone or limestone, which are too brittle to climb safely.

Devil's Lake has enjoyed a history of rock climbing since early ascents in the 20th century. Climbers such as the Stettner Brothers, and members of the hard-climbing group "DLFA" have frequented the park extensively. Guidebooks cover more than a lifetime's worth of unique "routes" and sub-areas of the park. For climbers, unique names for each major bluff formation is important in finding specific climbs and areas. The climbing style and protection system at Devil's Lake is known for its difficult, glassy rock and traditional fall-protection methods and anchors.

There have been occasional deaths, injuries, and emergency rescues among the rock climbers at Devil's Lake.

The "East Bluff" refers to the Eastern outcroppings in the park, and includes many sub-areas for climbers, including "Doorway Mass" which are climbs surrounding the famous Devil's Doorway formation, "Balanced Rock Wall" near the famous Balanced rock, and an area off of the CCC trail known as the "East Ramparts" which is the most popular due to the high concentration of sheer, unbroken cliff faces to climb.

Common mammal life includes deer, raccoon, red fox, coyote, squirrels, and beavers. Black bears, cougars, groundhogs, and wolves have all been spotted at Devil's Lake. There are 115 species of birds. The timber rattlesnake is also present.

All content from Kiddle encyclopedia articles (including the article images and facts) can be freely used under Attribution-ShareAlike license, unless stated otherwise. Cite this article:
Devil's Lake State Park (Wisconsin) Facts for Kids. Kiddle Encyclopedia.