Devil's Lake is a lake in the South Range of the Baraboo Range, about two miles south of Baraboo, Wisconsin, in Sauk County, Wisconsin, USA. It has no surface outlets, so by some definitions, it is endorheic; however, it probably drains by underground channels into the Baraboo River. The lake is one of the primary attractions of Devil's Lake State Park. It is also a popular recreation destination for watercraft, fishing, hiking, and climbing.

Devil's Lake was so named because it is situated in a deep chasm with no visible inlet or outlet. The term, devil's lake is a misinterpretation of the Ho-Chunk name Tawacunchukdah or Da-wa-kah-char-gra, which better translates to "Sacred Lake" or "Spirit Lake." Spirit Lake is highly significant in Ho-Chunk oral history, and voices of spirits were often heard during the celebrations. 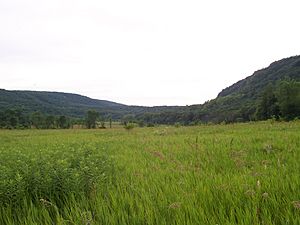 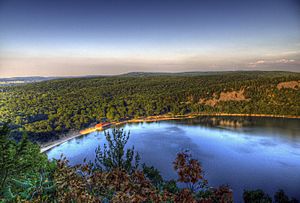 View of the Northern shore of Devil's Lake

Devil's Lake was originally a gorge of the Wisconsin River prior to the last ice age. At what is now the southern end of the lake, the river turned from a southerly direction to an easterly direction. During the ice age, a lobe of the glacier passed to the east of the Baraboo Hills and came up the river valley. It deposited materials and then melted, leaving a terminal moraine blocking the river, forming an earthen dam. Another moraine was deposited at the north end of the lake. The river eventually found a new course to the east of the Baraboo Hills, where the glacier had been, leaving a portion of the river gorge between the moraines filled with water. This body of water is Devil's Lake.

All content from Kiddle encyclopedia articles (including the article images and facts) can be freely used under Attribution-ShareAlike license, unless stated otherwise. Cite this article:
Devil's Lake (Wisconsin) Facts for Kids. Kiddle Encyclopedia.