Sauk County is a county in Wisconsin. It is named after a large village of the Sauk people. As of the 2010 census, the population was 61,976. Its county seat and largest city is Baraboo. The county was created in 1840 from Wisconsin Territory and organized in 1844.

The Yankee migration to Wisconsin in the 1830s was a result of several factors, one of which was the overpopulation of New England. The old stock Yankee population had large families, often bearing up to ten children in one household. Most people were expected to have their own piece of land to farm, and due to the massive and nonstop population boom, land in New England became scarce as every son claimed his own farmstead. As a result there was not enough land for every family to have a self-sustaining farm, and Yankee settlers began leaving New England for the Midwestern United States.

They were aided in this effort by the construction and completion of the Erie Canal which made traveling to the region much easier, causing an additional surge in migrants coming from New England. Added to this was the end of the Black Hawk War, which made the region much safer to travel through and settle in for white settlers.

They got to what is now Sauk County in the 1830s by sailing up the Wisconsin River from the Mississippi River on small barges which they constructed themselves out of materials obtained from the surrounding woodlands. When they arrived in what is now Sauk County there was nothing but dense virgin forest, the "Yankee" New Englanders laid out farms, constructed roads, erected government buildings and established post routes. They brought with them many of their Yankee New England values, such as a passion for education, establishing many schools as well as staunch support for abolitionism. They were mostly members of the Congregationalist Church though some were Episcopalian. Due to the second Great Awakening some of them had converted to Methodism and some became Baptist before moving to what is now Sauk County. Sauk County, like much of Wisconsin, would be culturally very continuous with early New England culture for most of its early history.

In the late 1890s, German immigrants began to settle in Sauk County, making up less than one out of thirty settlers in the county before this date. Generally there was little conflict between them and the "Yankee" settlers, however when conflict did arise it focused around the issue of prohibition of alcohol. On this issue the Yankees were divided and the Germans almost unanimously were opposed to it, tipping the balance in favor of opposition to prohibition. Later the two communities would be divided on the issue of World War I in which, once again, the Yankee community would be divided and the Germans were unanimously opposed to American entry into the war. The Yankee community was generally pro-British, however many of the Yankees also did not want America to enter the war themselves. The Germans were sympathetic to Germany and did not want the United States to enter into a war against Germany, but the Germans were not anti-British. Prior to World War I, many German community leaders in Wisconsin spoke openly and enthusiastically about how much better America was than Germany, due primarily (in their eyes) to the presence of English law and the English political culture the Americans had inherited from the colonial era, which they contrasted with the turmoil and oppression in Germany which they had so recently fled. In the early 1900s immigrants from Ireland, Sweden, Norway and Poland also arrived in Sauk County. The area around Baraboo was first settled by Abe Wood in 1838, and was originally known as the village of Adams. In 1846 it became the county seat of Sauk County after a fierce fight with the nearby village of Reedsburg. In 1852, the village was renamed "Baraboo", after the nearby river. It was incorporated as a city in 1882.

New England settlers set up several sawmills early in the history of what is now Baraboo because of its location near the Baraboo and Wisconsin Rivers.

The city was the home of the Ringling Brothers. From 1884 to 1917 it was the headquarters of their circus and several others, leading to the nickname "Circus City". Today Circus World Museum is located in Baraboo. A living history museum, it has a collection of circus wagons and other circus artifacts. It also has the largest library of circus information in the United States. The museum previously hosted the Great Circus Parade, which carried circus wagons and performers through the streets of Baraboo, across the state by train, and then through downtown Milwaukee.

The Al. Ringling Theatre is a grand scale movie palace in downtown Baraboo, made possible through the financial assistance of the Ringling family. The Al Ringling home still exists.

Located near Baraboo is the Badger Army Ammunition Plant, which was the largest munitions factory in the world during World War II, when it was known as "Badger Ordnance Works". The plant is no longer in use.

Cirrus Aircraft was founded in a rural Baraboo barn in 1984 by brothers Alan and Dale Klapmeier to produce the VK-30 kit aircraft. In 1994 the company moved to its present-day home in Duluth, Minnesota. 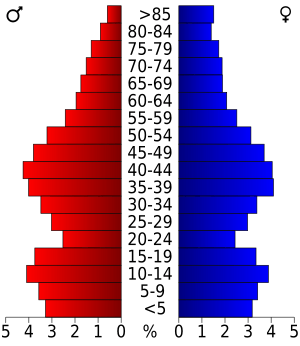 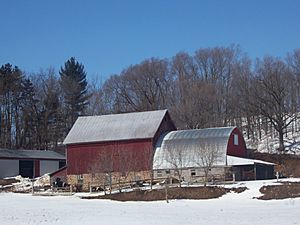 Farming in Sauk County near Reedsburg 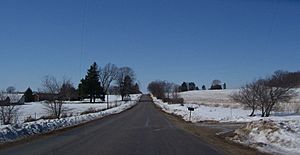 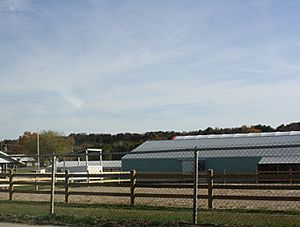 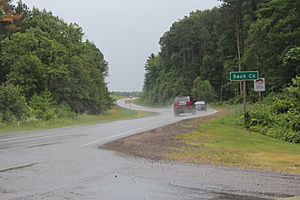 All content from Kiddle encyclopedia articles (including the article images and facts) can be freely used under Attribution-ShareAlike license, unless stated otherwise. Cite this article:
Sauk County, Wisconsin Facts for Kids. Kiddle Encyclopedia.