Bluffview is an unincorporated census-designated place located in the town of Sumpter in Sauk County, Wisconsin, United States. It was started as housing for workers of the now defunct Badger Army Ammunition Plant. As of the 2010 census, its population was 742. Bluffview has an area of 0.388 square miles (1.00 km2); 0.385 square miles (1.00 km2) of this is land, and 0.003 square miles (0.0078 km2) is water. Dr. Evermor's Forevertron can be found in Bluffview. 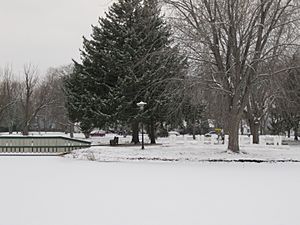 All content from Kiddle encyclopedia articles (including the article images and facts) can be freely used under Attribution-ShareAlike license, unless stated otherwise. Cite this article:
Bluffview, Wisconsin Facts for Kids. Kiddle Encyclopedia.