Adams County is a county in the U.S. state of Wisconsin. As of the 2010 census, the population was 20,875. Its county seat is Friendship. The county was created in 1848 and organized in 1853. Sources differ as to whether its name is in honor of the second President of the United States, John Adams, or his son, the sixth President, John Quincy Adams.

The founders of Adams County were from upstate New York. These people were "Yankee" settlers, that is to say they were descended from the English Puritans who settled New England in the 1600s. They were part of a wave of New England farmers who headed west into what was then the wilds of the Northwest Territory during the early 1800s. Most of them arrived as a result of the completion of the Erie Canal and the end of the Black Hawk War. They got to what is now Adams County by sailing up the Wisconsin River from the Mississippi River on small barges which they constructed themselves out of materials obtained from the surrounding woodlands. When they arrived in what is now Adams County there was nothing but dense virgin forest, the "Yankee" New Englanders laid out farms, constructed roads, erected government buildings and established post routes. They brought with them many of their Yankee New England values, such as a passion for education, establishing many schools as well as staunch support for abolitionism. They were mostly members of the Congregationalist Church though some were Episcopalian. Due to the second Great Awakening some of them had converted to Methodism and some became Baptist before moving to what is now Adams County. Adams County, like much of Wisconsin, would be culturally very continuous with early New England culture for most of its early history.

In the late 1880s, German immigrants began to settle in Adams County, making up less than one out of thirty settlers in the county before this date. Generally there was little conflict between them and the "Yankee" settlers, however when conflict did arise it focused around the issue of prohibition of alcohol. On this issue the Yankees were divided and the Germans almost unanimously were opposed to it, tipping the balance in favor of opposition to prohibition. Later the two communities would be divided on the issue of World War I in which, once again, the Yankee community would be divided and the Germans were unanimously opposed to American entry into the war. The Yankee community was generally pro-British, however many of the Yankees also did not want America to enter the war themselves. The Germans were sympathetic to Germany and did not want the United States to enter into a war against Germany, but the Germans were not anti-British. Prior to World War I, many German community leaders in Wisconsin spoke openly and enthusiastically about how much better America was than Germany, due primarily (in their eyes) to the presence of English law and the English political culture the Americans had inherited from the colonial era, which they contrasted with the turmoil and oppression in Germany which they had so recently fled. The area covered by present-day Adams County was historically part of several other counties. In 1840, when Wisconsin was still a territory, Adams County was the southwestern section of Brown County. In 1836, Portage County was created and included most of present-day Columbia County, including the city of Portage, Wisconsin. In 1846, Portage County was renamed Columbia County. The area from the northern boundary of Columbia County to Lake Superior was removed from Brown County and was then called Portage County. In 1848, the southern part of Portage County was renamed Adams County and included all of current-day Adams County and the northern section of Juneau County. Adams County was organized in April 1853. In 1858, The northwestern part of Adams County was joined with the northern part of Sauk County to form present-day Juneau County. At this time, Adams County took its current shape.

Friendship was founded by settlers coming from Friendship, New York. Today, Adams is the largest community in Adams County, but this was not always so. In the 1880s, there were plans for a railroad that connected Chicago and St. Paul to pass through Friendship. Once this was decided, local landowners increased their demands. Instead of paying more for the land in Friendship, the railroad placed the tracks two miles (3 km) south of Friendship. It was recorded that Emma Barnes, wife of "Appletree" Barnes, Friendship postmaster in the 1920s, wrote in 1957, "I believe that the people of Friendship should express their appreciation of two of the early citizens... J. B. Hill and J. W. Purves... for holding the price of their land so high that the great C&NW R.R. Co. would not purchase a right of way... for who would enjoy the smoke and the noise of a train running through this beautiful village?"

To house workers, boxcars were stacked to form housing, and the town of Adams was created. What is now the city of Adams the railroad originally called Friendship, but because there were two rail depot stops named "Friendship" on the rail-line, passengers were often confused and bought the wrong tickets, so it was suggested that the name be changed. The new name was determined by the citizens who chose between Adams, for President John Adams, and Nottingham. This stretch of track became the famous "400" route. Today the population of Adams is about three times that of Friendship. 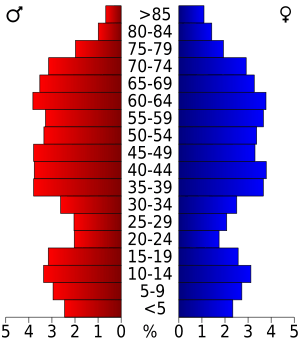 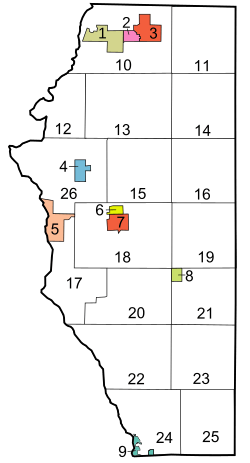 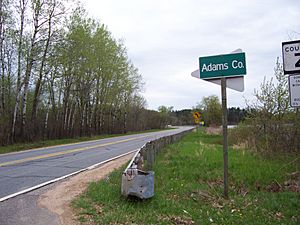 All content from Kiddle encyclopedia articles (including the article images and facts) can be freely used under Attribution-ShareAlike license, unless stated otherwise. Cite this article:
Adams County, Wisconsin Facts for Kids. Kiddle Encyclopedia.