Kids Encyclopedia Facts
This page is about the village. For the adjacent town, see Spring Green (town), Wisconsin. 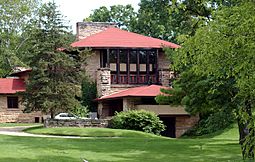 The Hillside Home School by Frank Lloyd Wright at Taliesin

Spring Green is a village in Sauk County, Wisconsin, United States. The population was 1,628 at the 2010 census. The village is located within the Town of Spring Green.

According to the United States Census Bureau, the village has a total area of 1.80 square miles (4.66 km2), all of it land. The Wisconsin River runs along the southern edge of the village.

There were 690 households, of which 31.2% had children under the age of 18 living with them, 50.4% were married couples living together, 8.6% had a female householder with no husband present, 3.8% had a male householder with no wife present, and 37.2% were non-families. 33.3% of all households were made up of individuals, and 18.6% had someone living alone who was 65 years of age or older. The average household size was 2.27 and the average family size was 2.88.

The world-renowned architect Frank Lloyd Wright was born in nearby Richland Center, Wisconsin, studied in Madison, Wisconsin, and spent summers and other times near Spring Green with his mother’s family, the Lloyd-Joneses of Wyoming Valley. He became identified with Spring Green when he built the first Taliesin (studio) nearby in 1911 after leaving his Oak Park, Illinois family, home, and studio with the wife of an erstwhile client. On the other hand, some Spring Green craftsmen were among Wright’s trusted and lifelong favorites. Taliesin was continuously rebuilt over the years and became a local landmark. Wright was buried in the Lloyd-Jones family cemetery next to Unity Chapel near Taliesin and Spring Green from his death in 1959 until 1985, when his remains were controversially removed after the death of his third wife and widow, cremated and reinterred in Arizona. Especially in the past several decades, growing worldwide appreciation of Wright’s legacy has brought increased attention as well as tourism to the Spring Green area. Architects from the Frank Lloyd Wright Foundation, along with Wright-trained architects native to the area, have designed numerous homes and commercial and civic buildings in Spring Green and the surrounding area.

All content from Kiddle encyclopedia articles (including the article images and facts) can be freely used under Attribution-ShareAlike license, unless stated otherwise. Cite this article:
Spring Green, Wisconsin Facts for Kids. Kiddle Encyclopedia.