Richland Center is a city in Richland County, Wisconsin, United States that also serves as the county seat. The population was 5,184 at the 2010 census.

In 1876, a narrow gauge railroad branch connected Richland Center with the Chicago, Milwaukee & St. Paul Railroad at Lone Rock, Wisconsin, providing an outlet for the town's commerce. The line was originally constructed with maple rails, but it was rebuilt as a standard gauge iron railway in 1880. On October 8, 1882, the town's railway depot was destroyed when an early morning fire ignited two kegs of gunpowder stored inside, causing an explosion that tore the roof from the building and scorched several nearby rail cars. Another passenger depot, built in 1909, still stands today, serving as a visitor center for the community.

Richland Center became an important location for the women's suffrage movement in Wisconsin after Laura Briggs James, Julia Bowen, and other residents founded the Richland Center Woman's Club in early 1882. The club quickly became the largest suffrage group in the state and was influential in organizing the movement throughout Wisconsin. Susan B. Anthony visited Richland Center in 1886. Later, Laura James' daughter Ada James became influential in the movement, helping to found the Political Equality League in 1909 and advocating for women's rights, pacifism and prohibition.

Frank Lloyd Wright was born at Richland Center in 1867. The A. D. German Warehouse, completed in 1921, is the only building designed by Wright in the city and is an early example of his Mayan Revival style. 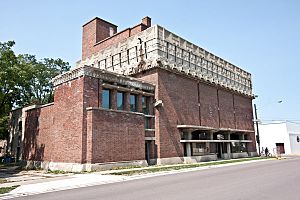 The origin of GTE can be traced to the Richland Center Telephone Company. In 1918, three Wisconsin public utility accountants (Sigurd L. Odegard, John A. Pratt, and John F. O'Connell) purchased the Richland Center Telephone Company for $33,500. At that time, the modest company served only 1,466 telephones in southern Wisconsin. But in 1920, the three accountants formed the Commonwealth Telephone Company and engaged in an aggressive acquisition program, which dramatically expanded its services to more than 500,000 telephones in 25 states. Following bankruptcy during the Great Depression, the company reorganized into the General Telephone Corporation and continued to expand. After merging with Sylvania Electric Products in 1959, it once again changed its name, this time to General Telephone & Electronics Corporation (GT&E, later GTE). By 1969, GTE provided service to 10 million telephones across the nation, making it the largest independent telephone company in the United States.

The Pine River runs along the western edge of the town.

The city is served by the Richland School District.

All content from Kiddle encyclopedia articles (including the article images and facts) can be freely used under Attribution-ShareAlike license, unless stated otherwise. Cite this article:
Richland Center, Wisconsin Facts for Kids. Kiddle Encyclopedia.