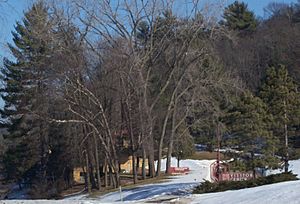 APT sits on 110 acres (0.45 km2) of woods and meadow just off the Wisconsin River across Wisconsin Highway 23 from Frank Lloyd Wright's studio Taliesin. Founded in 1980, APT has grown rapidly in recent years, with more than 100,000 patrons attending performances each year. It currently claims to have the second largest audience in the United States for outdoor classical theater.

APT typically produces 116 performances of nine plays running in repertory from June to November. In 2009, APT opened the new, indoor Touchstone Theatre, with 200 seats. APT's repertoire consists primarily of plays by Shakespeare and other noted (usually Western) playwrights, such as George Bernard Shaw, Anton Chekhov, and Molière. Two of the plays at either "the hill theatre" or "Touchstone Theatre" are typically Shakespeares, with some 20th-century productions performed on both the Hill and the Touchstone. 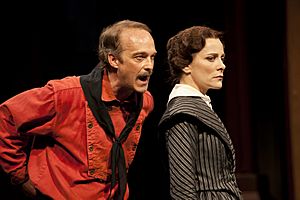 James Ridge & Tracy Michelle Arnold in Taming of the Shrew, 2011

A significant part of APT is its education program. APT works with schools and educators to teach students both about Shakespeare and other classic dramatic works, and about the theater in general. Each season, APT offers student matinees during school hours in the fall. The actors of APT also conduct in-school workshops.

All content from Kiddle encyclopedia articles (including the article images and facts) can be freely used under Attribution-ShareAlike license, unless stated otherwise. Cite this article:
American Players Theatre Facts for Kids. Kiddle Encyclopedia.