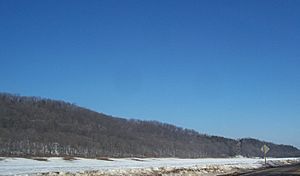 Looking east down the range on Wisconsin Highway 78

Baraboo Range is a syncline located in Columbia and Sauk Counties, Wisconsin. It consists of highly eroded Precambrian metamorphic rock. It is about 25 miles (40 km) long and varies from 5 to 10 miles (16 km) in width. The Wisconsin River, previously traveling in a north to south direction, turns to the east just north of the range before making its turn to the west towards the Upper Mississippi River. The eastern end of the range was glaciated during the Wisconsinian glaciation, while the western half was not, and consequently, marks the eastern boundary of Wisconsin's Driftless Area.

The city of Baraboo is in the center of the valley. The range was designated a National Natural Landmark in 1980.

The range is an example of a buried mountain range exposed through erosion, to once again undergo the forces of surface erosion. The rocks are as much as 1.5 billion years old, among the oldest exposed rocks in North America, consisting mainly of gray to pink Baraboo Quartzite and red rhyolite. The Baraboo River divides the range in half, flowing through Upper Narrows Gorge near Rock Springs and travels onto its confluence with the Wisconsin River downstream from Portage through the Lower Narrows. The Baraboos are composed of resistant Precambrian quartzite (a metamorphic rock) which has formed an erosional remnant or Monadnock, resulting in topographic prominence. The mountains may have formed as long ago as the late Precambrian. These formations were buried by Paleozoic sedimentary strata and are still being uncovered by the erosion of the softer, overlying rocks.

Devil's Lake, the centerpiece of Devil's Lake State Park, was formed from terminal moraines blocking access to its outlet, creating what is today an endorheic lake (i.e., a lake lacking a surface outlet to the world's oceans).

All content from Kiddle encyclopedia articles (including the article images and facts) can be freely used under Attribution-ShareAlike license, unless stated otherwise. Cite this article:
Baraboo Range Facts for Kids. Kiddle Encyclopedia.