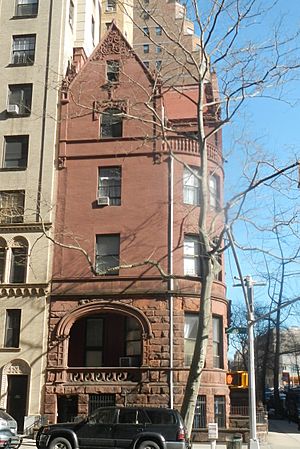 The house, built as a single-family residence, was built in 1892 as the residence of Isabella and John B. Leech. Leech was a prosperous cotton broker. The architect was Clarence F. True. At the time the Leech residence was built, West End Avenue was lined with homes belonging to prosperous families.

520 West End Avenue is a Romanesque Revival building, built of blocks of rusticated limestone on the first two floors with tan-colored Roman brick above. The detailing draws on Gothic Revival and Elizabethan Revival styles. Built on a corner lot, it was one of the largest homes on a street of townhouses. For a time it housed the Gordon-Winston School. It is now an apartment building.

The house was declared a New York City landmark in 1987.

All content from Kiddle encyclopedia articles (including the article images and facts) can be freely used under Attribution-ShareAlike license, unless stated otherwise. Cite this article:
520 West End Avenue Facts for Kids. Kiddle Encyclopedia.