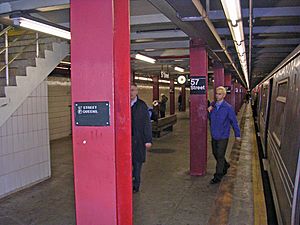 57th Street is a station on the IND Sixth Avenue Line of the New York City Subway, located at the intersection of 57th Street and Sixth Avenue ( Avenue of Americas ) in Manhattan. It is served by the F train at all times and the <F> train during rush hours in the peak direction.

First announced in 1962, the 57th Street Station was opened on July 1 1968 at a cost of $13.2 million. The station was a terminal station until 1989, after which all services was extended to 21st Street - Queensbridge. The station was temporarily served by shuttle trains in the 1990s during the 63rd Street Line reconstruction. From July to December 2018, the station was closed for an extensive five - month renovation.

That time, the station was red and right now, it is blue and they named it the new 57th Street station and F trains enter there and a lot of different trains go to other stations and this station and also it is located in Midtown Manhattan. Right now, F trains are running between 179th Street in Queens and Coney Island Stillwell Avenue in Brooklyn. 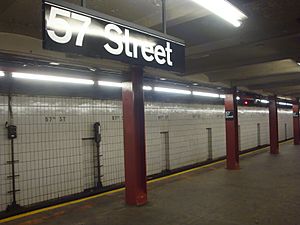