69-71 Bondway (currently styled as AYKON London One) is an approved 50-storey 170 metre high building to be built in Nine Elms, London, England, with an estimated completion date of 2020.

There will be 360 apartments. The interiors will be designed by Donatella Versace.

In November 2013, KPF announced a proposal for new building to be called "New Bondway" featuring two connected towers of 50 stories and 23 stories featuring 450 flats, 3,700m2 of office space and 1,000m2 of shops. The planning application to the London Borough of Lambeth is 14/00601/FUL.

The original joint developers of Citygrove Securities plc and McLaren Property Ltd sold the project to DAMAC in June 2015. 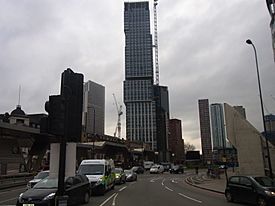 The building in December, 2019

In August 2016, it was announced that DAMAC had awarded the building contract to Lendlease with a value of £200m.

All content from Kiddle encyclopedia articles (including the article images and facts) can be freely used under Attribution-ShareAlike license, unless stated otherwise. Cite this article:
69-71 Bondway Facts for Kids. Kiddle Encyclopedia.