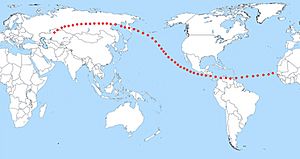 (99942) Apophis is a near-Earth asteroid that worried people for a short time in December 2004. This was because observations seemed to show that it would hit the Earth in 2029. Other observations had more accurate, or better, ideas. During 2029, Apophis would go through a "gravitational keyhole", an area in space no more than about 400 meters across. This would make it hit the Earth on April 13, 2036. This danger made the asteroid Level 1 on the Torino impact hazard scale until August 2006.

These sources are updated as new orbital data becomes available:

All content from Kiddle encyclopedia articles (including the article images and facts) can be freely used under Attribution-ShareAlike license, unless stated otherwise. Cite this article:
99942 Apophis Facts for Kids. Kiddle Encyclopedia.