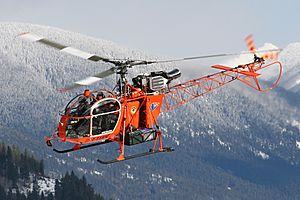 The Aérospatiale SA-315 Lama is a French helicopter designed and built for operations in mountains. It is used by both civilians and the military. It is a fuselage of Alouette II which was assembled an Alouette III's turboshaft. Many were built in India as Cheetah.

All content from Kiddle encyclopedia articles (including the article images and facts) can be freely used under Attribution-ShareAlike license, unless stated otherwise. Cite this article:
Aérospatiale SA-315 Lama Facts for Kids. Kiddle Encyclopedia.