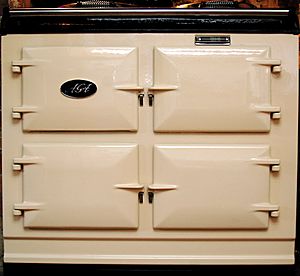 A modern-day three-oven AGA cooker. What appears to be a fourth oven door is the door to the burner

The AGA cooker is a heat storage stove and cooker. The heavy frame is made of cast iron and absorbs heat from a low-intensity source. Originally, AGAs burnt coke or anthracite. Later versions used gas as the heat source.

The heat is used for cooking. It was invented and initially produced in Sweden. From 1957 all production has been in the United Kingdom.

The cast-iron parts were cast at the Coalbrookdale foundry in the 1940s. They were still made there by the Aga Rangemaster Group until November 2017 when the company closed the site.

Owners often talk about how the AGA actually makes their homes more energy efficient. The AGA does a number of jobs: it replaces several radiators, a tumble dryer, electric kettle and toaster. It is not just a cooker.

The company which makes AGAs also makes other stoves, such as the Rayburn range. It is the Aga Rangemaster Group, which was taken over by the US company Middleton Corporation in 2015.

All content from Kiddle encyclopedia articles (including the article images and facts) can be freely used under Attribution-ShareAlike license, unless stated otherwise. Cite this article:
AGA cooker Facts for Kids. Kiddle Encyclopedia.