A Journey facts for kids 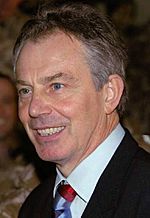 The book was published on September 1, 2010. All money made by the book was donated to the Royal British Legion, which is a charity that financially and socially helps people who have served or are serving in the British Armed Forces. The book is 624 pages long and has received mixed reviews from critics.

All content from Kiddle encyclopedia articles (including the article images and facts) can be freely used under Attribution-ShareAlike license, unless stated otherwise. Cite this article:
A Journey Facts for Kids. Kiddle Encyclopedia.