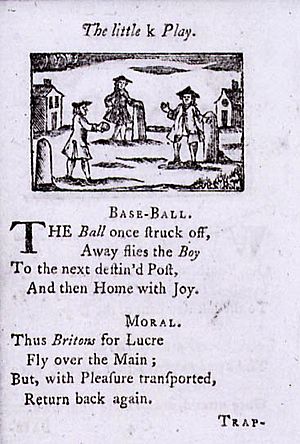 A woodcut from A Pretty Little Pocketbook, (1744) England, showing the first reference to baseball

A Little Pretty Pocket-Book, intended for the Amusement of Little Master Tommy and Pretty Miss Polly with Two Letters from Jack the Giant Killer is the title of a 1744 children's book by British publisher John Newbery.

The book includes a woodcut of stool-ball among other period games, and includes a rhyme entitled "Base-Ball." This is the first known reference to "base-ball" or "baseball" in print, though it actually meant the game rounders, an ancestor of modern baseball. Of baseball's English origin: "The game of Rounders has been played in England since Tudor Times, with the earliest reference being in 1744 in "A Little Pretty Pocketbook" where it is called baseball." "It is a striking and fielding team game, which involves hitting a small hard leather cased ball with a round wooden or metal bat and then running around 4 bases in order to score."

All content from Kiddle encyclopedia articles (including the article images and facts) can be freely used under Attribution-ShareAlike license, unless stated otherwise. Cite this article:
A Little Pretty Pocket-Book Facts for Kids. Kiddle Encyclopedia.