A V Swamy facts for kids 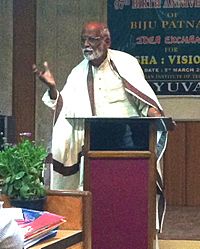 Alajangi Viswanath Swamy (18 July 1928 – 31 December 2019) was an Indian politician. He was elected to the Rajya Sabha the Upper house of Indian Parliament from Odisha as an Independent candidate. From 2012 through 2018 he was in the parliament. Swamy was born in Nabarangpur, Odisha.

Swamy died at his home of cardiac arrest on 31 December 2019 in Bhubaneswar, Odisha at the age of 91.

All content from Kiddle encyclopedia articles (including the article images and facts) can be freely used under Attribution-ShareAlike license, unless stated otherwise. Cite this article:
A V Swamy Facts for Kids. Kiddle Encyclopedia.