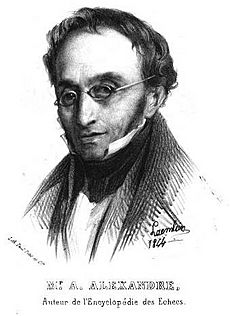 Aaron Alexandre trained as a rabbi. He arrived in France in 1793. He taught German and was a mechanical inventor. He later became a full-time chess player. He wrote a book of all the known chess openings, the Encyclopédie des échecs (Encyclopedia of Chess, Paris, 1837). In the book, he used the algebraic notation and the castling symbols 0–0 and 0–0–0.

His next book was about the endgame and a collection of about 2000 chess problems, which he published in 1846 as Collection des plus beaux Problèmes d'Echecs, Paris. English and German translations: Beauties of Chess, London, and Praktische Sammlung bester Schachspiel-Probleme, Leipzig.

Both books became standard reference books, demonstrating Alexandre’s great technical knowledge. Alexandre was also one of the chess players who worked inside the chess playing machine, the Turk.

All content from Kiddle encyclopedia articles (including the article images and facts) can be freely used under Attribution-ShareAlike license, unless stated otherwise. Cite this article:
Aaron Alexandre Facts for Kids. Kiddle Encyclopedia.