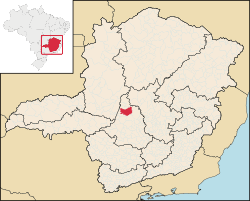 Abaeté belongs to the statistical micro-region of Três Marias. It is located at an elevation of 641 meters between the São Francisco River and the Indaiá River. Neighboring municipalities are:

Abaeté, of Tupi-Guarani origin, means strong man or brave man. It was the word by which the local natives called themselves. The first name of the settlement was Nossa Senhora das Dores do Marmelada.

All content from Kiddle encyclopedia articles (including the article images and facts) can be freely used under Attribution-ShareAlike license, unless stated otherwise. Cite this article:
Abaeté Facts for Kids. Kiddle Encyclopedia.