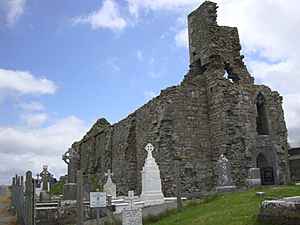 Abbeydorney Abbey, also known as Kyrie Eleison Abbey or Odorney was founded by the O Torna, chieftain of the region, in 1154 for the Cistercians from Monasteranenagh.

The abbey was the daughter-house of Nenay Abbey in County Limerick, and was the only medieval Cistercian house in County Kerry.

The name given by the Cistercians, Kyrie Eleison (from Greek: Lord Have Mercy) was in accordance with the order's tradition of giving names which reflected the locality - in this instance the word Kyrie (Lord) being similar to Ciarrai (County Kerry).

The first abbot was Christian O Conarchy who retired to the abbey where he spent his remaining years, being buried there in 1186.

A subsequent abbot was deposed in 1227 after being involved in the Conspiracy of Mellifont.

The foundation was dissolved in 1537.

The remains visible today include the 15th century abbey church with west tower and some of the claustral buildings. The grounds are largely occupied by gravestones and are currently in use as a cemetery.

All content from Kiddle encyclopedia articles (including the article images and facts) can be freely used under Attribution-ShareAlike license, unless stated otherwise. Cite this article:
Abbeydorney Abbey Facts for Kids. Kiddle Encyclopedia.