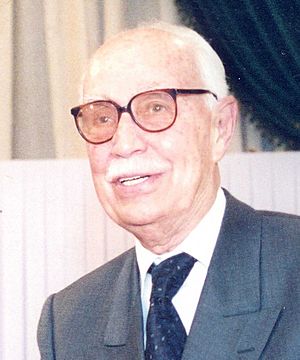 Abdelkrim Ghallab (December 31, 1919 – August 14, 2017) was a Moroccan political journalist, cultural commentator, and novelist. He was born in Fes, Morocco. He was an important figure both in the literary and political field. He studied both at the University of Al-Karaouine in Fez and at the University of Cairo.

Ghallab was the author of five novels and three collections of short stories. His best known novel is Dafann al-m'd (The buried Past), 1966. According to Simon Gikandi his Arabic style is known for its "graceful and at times scholarly classicism".

In 2000, the Union of Arab writers in Egypt included his novel Al-Mu`alîm `Ali (Master Alí) among the hundred best Arabic novels in history. In 2001, the Moroccan department of Culture published the complete works of Ghallab in five volumes. In 2004 he was awarded the Maghreb Culture prize of Tunis. His work has been translated in many languages.

All content from Kiddle encyclopedia articles (including the article images and facts) can be freely used under Attribution-ShareAlike license, unless stated otherwise. Cite this article:
Abdelkrim Ghallab Facts for Kids. Kiddle Encyclopedia.