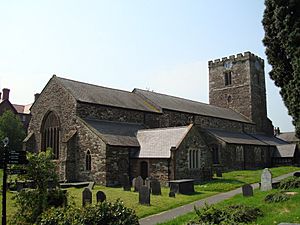 The former abbey church, now the parish church for Conwy 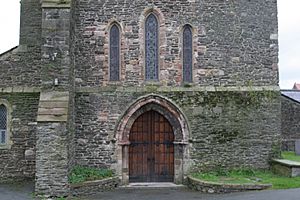 Aberconwy Abbey was a Cistercian foundation at Conwy, later transferred to Maenan near Llanrwst, and in the 13th century was the most important abbey in the north of Wales.

A Cistercian house was founded at Rhedynog Felen near Caernarfon in 1186 by a group of monks from Strata Florida Abbey. About four or five years later they moved to Conwy, and in 1199 were given large grants of land by Llywelyn the Great who had recently become ruler of Gwynedd. Llywelyn was regarded as the founder of the house, and thanks to his support it came to hold more land than any other Welsh abbey, over 40,000 acres (160 km²). On Llywelyn's death in 1240 he was buried at the abbey, and his son and successor Dafydd ap Llywelyn was also buried here in 1246. In 1248 Llywelyn's other son, Gruffydd ap Llywelyn, who had died trying to escape from the Tower of London in 1244, was reburied at Aberconwy after the abbot of Aberconwy, together with the abbot of Strata Florida, had arranged for his body to be repatriated from London.

The abbot of Aberconwy was an important figure in the negotiations between Llywelyn ap Gruffudd and the English crown later in the century, and in 1262 was entrusted with the task of being Llywelyn's sole representative in negotiations.

In 1282, Edward I of England surrounded Snowdonia with a massive army. On 11 December Llywelyn ap Gruffudd, Tywysog Cymru, was lured into a trap and murdered.

Little remains of the Maenan Abbey buildings, but the original abbey church in Conwy was adapted to become the parish church of St Mary & All Saints and although much rebuilt over the centuries some parts of the original church remain. The other buildings of the abbey are thought to have been located north and east of the church.

All content from Kiddle encyclopedia articles (including the article images and facts) can be freely used under Attribution-ShareAlike license, unless stated otherwise. Cite this article:
Aberconwy Abbey Facts for Kids. Kiddle Encyclopedia.