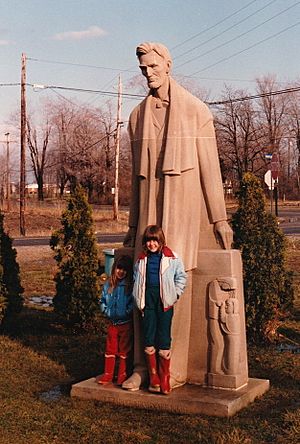 The figure of Lincoln, larger than life-size (9 feet 8 inches [2.95 m] tall) is bracketed by two smaller groups one leaning on a fasces and the other depicting a figure with broken chains.

The original idea for the statue arose out of a visit by Cashwan, who was employed by the Federal Art Project in Michigan, in the course of a visit to inspect several WPA murals at Lincoln School by the Leon Makielski and his brother, Bronislau. There he proposed that he create the statue if the students at the school would do the work involved in erecting and landscaping the area around where the sculpture would be. Cashwan carved the statue in three parts, the "junior-high boys dug the excavation for the base; the "senior-highs" poured the concrete; all hands joined in the sodding and decorative planting." The work was unveiled on May 4, 1938, the anniversary of Lincoln’s burial.

Over the years the statue fared rather badly, Lincoln’s face was vandalized and paint was poured over the statue.

All content from Kiddle encyclopedia articles (including the article images and facts) can be freely used under Attribution-ShareAlike license, unless stated otherwise. Cite this article:
Abraham Lincoln Monument (Ypsilanti, Michigan) Facts for Kids. Kiddle Encyclopedia.