Absecon Inlet is a narrow strait on the southeastern coast of New Jersey in the United States. 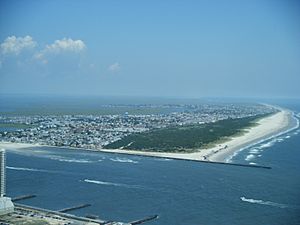 Entrance to inlet looking to Brigantine

Absecon Inlet is navigable for small-sized coasting vessels, and furnishes ingress and exit to the waters of Absecon and Reed's Bays, small bodies of water in Atlantic County. No considerable stream except Absecon Creek flows into them.

All content from Kiddle encyclopedia articles (including the article images and facts) can be freely used under Attribution-ShareAlike license, unless stated otherwise. Cite this article:
Absecon Inlet Facts for Kids. Kiddle Encyclopedia.