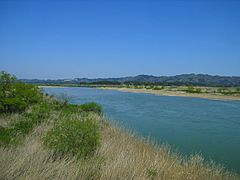 Lower course of the Abukuma River (at Kakuda, April 2005)

The Abukuma River (阿武隈川, Abukuma gawa or Abukumagawa) is a river in the Tōhoku region of Japan. It has a length of 234 kilometers. It is the second longest river in the Tōhoku region of Japan and the 6th longest river in Japan. It rises from springs in the peaks of the Nasu Mountains. It collects water from tributaries leaving the Ōu Mountains and the Abukuma Highlands (阿武隈高地). Then, it empties out into the Pacific Ocean as a major river. It has a 5,390 km² area watershed. About 1.2 million people live along its basin.

All content from Kiddle encyclopedia articles (including the article images and facts) can be freely used under Attribution-ShareAlike license, unless stated otherwise. Cite this article:
Abukuma River Facts for Kids. Kiddle Encyclopedia.