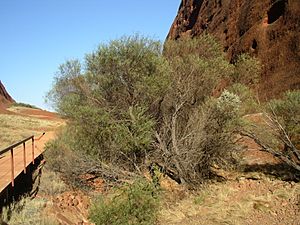 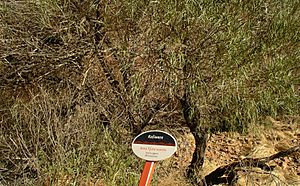 Acacia olgana, commonly known as Kata Tjuta wattle or Mount Olga wattle, is a shrub or tree in the genus Acacia that is found in central Australia.

The shrub or tree typically grows to a height of 3 to 6 metres (10 to 20 ft) but can be as tall as 15 metres (49 ft). It has rough, slightly fissured bark that is grey or grey-brown in colour with angular branches that are light brown to reddish in colour and mostly glabrous. The evergreen phyllodes sometimes have reddish margins. The blade shape is flat and linear to narrowly elliptic with a length of 6 to 18 centimetres (2 to 7 in) and a width of 2 to 10 millimetres (0.079 to 0.394 in) long with one prominent central nerve.

The species was first formally described by the botanist John Maconochie in 1978 as part of the work Notes on the genus Acacia in the Northern Territory as published in the Journal of the Adelaide Botanic Gardens. It was later reclassified as Racosperma olganum by Leslie Pedley in 1986 but transferred back to the genus Acacia in 2006.

A. olgana has a scattered distribution from the far east of central Western Australia in the Goldfields region into the south of the Northern Territory and north western South Australia.

All content from Kiddle encyclopedia articles (including the article images and facts) can be freely used under Attribution-ShareAlike license, unless stated otherwise. Cite this article:
Acacia olgana Facts for Kids. Kiddle Encyclopedia.