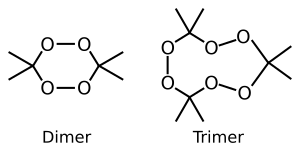 Acetone Peroxide in its dimer and trimer forms 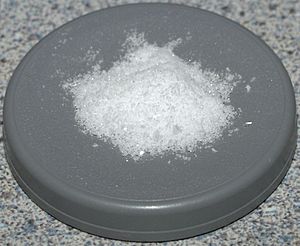 Acetone peroxide as a powder

Acetone peroxide (also called APEX) is a very explosive and dangerous chemical compound. It is often seen as a dimer or trimer. This means that the molecules of acetone peroxide are connected to each other two or three times.

Acetone peroxide does not see much use in armies around the world, because it does not last very long. It only lasts around 10 days. However, it is very popular among terrorist groups, because it is cheap to make and very energetic. It is also one of the few explosives that do not contain nitrogen, making it hard to find.

All content from Kiddle encyclopedia articles (including the article images and facts) can be freely used under Attribution-ShareAlike license, unless stated otherwise. Cite this article:
Acetone peroxide Facts for Kids. Kiddle Encyclopedia.