Aconitum columbianum is a species of flowering plant in the buttercup family known by the common names Columbian monkshood or western monkshood.

This wildflower is native to western North America where it grows in riparian and other moist areas, in meadows and coniferous forests. It is found from 600–2,900 metres (2,000–9,500 ft) in elevation.

Aconitum columbianum is a tall spindly erect to scandent forb which is perennial from rhizomes. It has lobed or toothed leaves and long stems with far-spaced flowers. 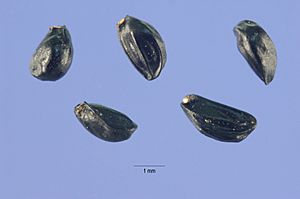 The folded, wrinkly flowers are often deep blue or purple, but may also be white or yellowish, and they usually have a spur. The fruits are pod-like follicles.

Like other monkshoods (Aconitum species), this plant is poisonous to humans and livestock, although some species have been used to make drugs.

Subspecies and varieties include:

All content from Kiddle encyclopedia articles (including the article images and facts) can be freely used under Attribution-ShareAlike license, unless stated otherwise. Cite this article:
Aconitum columbianum Facts for Kids. Kiddle Encyclopedia.