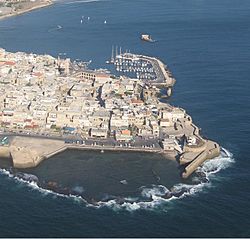 Acre Port is an ancient port in the old city of Acre, Israel. The port has a 2000-year-old history. Recent archaeology suggests that the port was originally in the south of Acre, at the mouth of Na'aman River. The port was closed in the time of the British Mandate, which chose to use the Haifa Port instead of Acre. In 1965, a new breakwater was built. In 1982, the port became a marina.

All content from Kiddle encyclopedia articles (including the article images and facts) can be freely used under Attribution-ShareAlike license, unless stated otherwise. Cite this article:
Acre Port Facts for Kids. Kiddle Encyclopedia.