Acres of Books facts for kids 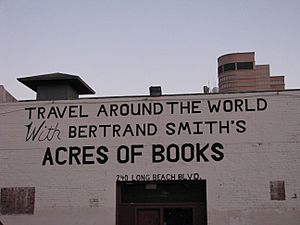 Acres of Books was a large independent bookstore in downtown Long Beach, California. 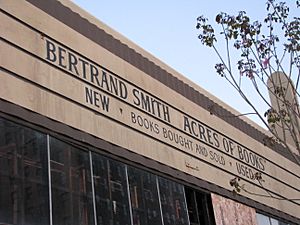 The business was founded in Cincinnati, Ohio, in 1927 by Bertrand Smith. In 1934 Smith moved to California and established the store in Long Beach; he moved to the current address in 1960. Acres of Books was the largest and oldest family-owned second-hand bookstore in California, claiming to have in stock over one million books.

In 1959 Smith gave to the people of Long Beach a collection of rare books, some dating back to the 15th century. Included in the collection is a two volume facsimile of the Gutenberg Bible, all of which is housed as part of the Loraine and Earl Burns Miller Special Collections Room at the main branch of the Long Beach public library.

In 1990 Acres of Books was designated a cultural heritage landmark by the City of Long Beach.

Acres of Books closed on October 18, 2008. The owners have sold the 12,000-square-foot (1,100 m2) lot the store is located on to the Long Beach Redevelopment Agency for $2.8 million. Subsequently, the Redevelopment Agency was dissolved by order of Governor Jerry Brown.

The site was proposed to be developed as an art exchange, but the project seems to be moribund.

The bookstore appeared in the film The Jane Austen Book Club

All content from Kiddle encyclopedia articles (including the article images and facts) can be freely used under Attribution-ShareAlike license, unless stated otherwise. Cite this article:
Acres of Books Facts for Kids. Kiddle Encyclopedia.