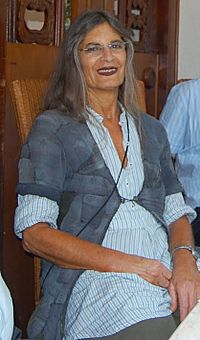 Ada Rapoport-Albert (Hebrew: עדה רפפורט-אלברט; 26 October 1945 – 18 June 2020) was an Israeli-British scholar. She lived in the United Kingdom. At the University College London, where she became an Associate Professor in Jewish History. She became in 2002 head of the department of Hebrew and Jewish Studies.

All content from Kiddle encyclopedia articles (including the article images and facts) can be freely used under Attribution-ShareAlike license, unless stated otherwise. Cite this article:
Ada Rapoport-Albert Facts for Kids. Kiddle Encyclopedia.