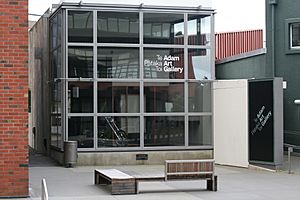 Frontage of the Adam Art Gallery. Its facade is made of glass. The Old Kirk building is located to the left of the gallery, and the Students' Union building to the right.

The Adam Art Gallery (in Māori: Te Pātaka Toi) is a "purpose built" arts gallery located in the Kelburn Campus of Victoria University of Wellington in Wellington, New Zealand. 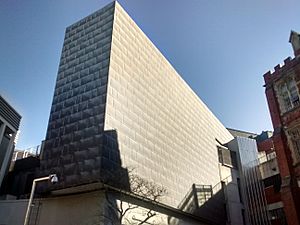 The back of the gallery

On 15 July 1997, Jenny Harper and Tina Barton started the proceedings to establish the gallery.

The gallery's benefactors include Victoria University of Wellington Foundation, as well as Denis and Verna Adam (who the gallery was subsequently named after following their donation of NZ$1 million in 1998.

The gallery was designed by Ian Athfield. It was built between the three university buildings the Old Kirk Building, the Hunter Building and the Student Union Building (on top of the existing "Culliford stair").

The stairs were built in the mid-1960s to link different buildings, but had to be abandoned for safety reasons. The building includes different gallery spaces that hold exhibitions, performances, lectures and talks.

All content from Kiddle encyclopedia articles (including the article images and facts) can be freely used under Attribution-ShareAlike license, unless stated otherwise. Cite this article:
Adam Art Gallery Facts for Kids. Kiddle Encyclopedia.