The southern end of Auckland Island broadens to a width of 26 km (16 mi) where a narrow channel, known as Carnley Harbour or the Adams Straits, separates it from the roughly triangular Adams Island (area approximately 100 km2 or 39 sq mi), which is even more mountainous, reaching a height of 705 m (2,313 ft) at Mount Dick. The channel is the remnant of the crater of an extinct volcano, with Adams Island, and the southern part of Auckland Island forming the crater rim.

Two large indentations, Bolton's Bay and Fly Harbour, are the most prominent features of the island's south coast, both in the south east. 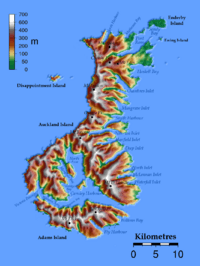 Map of the Auckland Islands, showing Adams Island to the south of the main island.

The island is part of the Auckland Island group Important Bird Area (IBA), identified as such by BirdLife International because of the significance of the group as a breeding site for several species of seabirds as well as the endemic Auckland shag, Auckland teal, Auckland rail and Auckland snipe.

All content from Kiddle encyclopedia articles (including the article images and facts) can be freely used under Attribution-ShareAlike license, unless stated otherwise. Cite this article:
Adams Island, New Zealand Facts for Kids. Kiddle Encyclopedia.