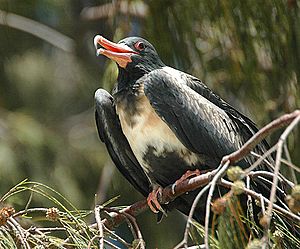 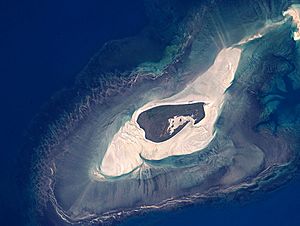 Adele Island is an island located in the Indian Ocean approximately 104 kilometres (65 mi) North of Ardyaloon off the Kimberley coast in Western Australia.

The island is fish-hook shaped and has a length of 2.9 kilometres (2 mi) and a width of 1.6 kilometres (1 mi) and a total area of 217 hectares (536 acres). It is low-lying and surrounded by extensive sandbanks lying over a limestone platform forming a large lagoon.

Nicolas Baudin named the island in 1801 as part of his expedition around Australia. The name of the island was first charted on the Freycinet Map of 1811. It was declared a Nature Reserve in 2001 in recognition of its status as a bird breeding sanctuary. Since then the Department of Environment and Conservation has embarked on a campaign to eradicate the island of the Polynesian Rats that are a constant threat to the native seabirds.

An acetylene-powered lighthouse was built on the island in 1951 it was later upgraded to solar power in 1985.

The island is classified by BirdLife International as an Important Bird Area for its seabirds and waders. As well as breeding cormorants and Australian pelicans, globally important bird species breeding or staging on the island are lesser frigatebird with 2000-5700 breeding pairs, brown booby with 1500-8500 breeding pairs, grey-tailed tattler with up to 5500 individuals, and red-necked stint with up to 4100 individuals.

All content from Kiddle encyclopedia articles (including the article images and facts) can be freely used under Attribution-ShareAlike license, unless stated otherwise. Cite this article:
Adele Island (Western Australia) Facts for Kids. Kiddle Encyclopedia.