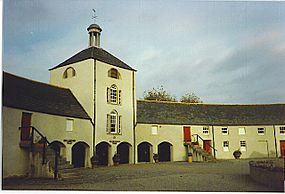 Aden Country Park is located in Mintlaw, Aberdeenshire, Scotland. The park has a caravan area with camping, a small shop, a small cafe near the agricultural museum, a play area, the maintained ruins of Aden House, landscaped gardens, and a barbecue area. Aden Park can be accessed from Mintlaw by Station Road or Nether Aden Road.

It is home to the Aberdeenshire Farming Museum, forest walks and a ruined country house. Every year it hosts a pipe band contest which attracts bagpipe bands from around Scotland.

The Hareshowe Working Farm was moved to Aden Country Park in the early 1990s. The farmhouse has been restored to a 1950s appearance and guided tours provide demonstrations of cooking and farm activities.

The mansion house formerly belonging to the Russell family was said to have been beautiful before it was ruined. Alexander Russell of Montcoffer (1723–98) bought the Aden estate in 1758 from James Ferguson of Kinmundy. Alexander Russell's great great grandson, Sidney Russell (1895-1965), was the last Russell laird to live at Aden. He sold the estate in 1937 and moved to Dorset. The Barony of Aden is still held by the Russell family.

During World War II it was used as an army barracks and it is said that the inside decoration was damaged and had lost its lustre once the army were finished with it. After the war the house was left to fall into ruin.

The house is made of grey granite.

All content from Kiddle encyclopedia articles (including the article images and facts) can be freely used under Attribution-ShareAlike license, unless stated otherwise. Cite this article:
Aden Country Park Facts for Kids. Kiddle Encyclopedia.