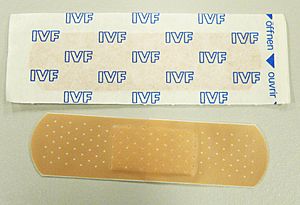 An adhesive bandage is a small medical dressing. It used for wounds that are not serious. The adhesive bandage protects the wound from bacteria, further damage, and dirt. It helps the body to heal itself. Some of the dressings have antiseptic properties. It also holds the cut together so that the body can heal itself. It can, however, sometimes cause allergies.

All content from Kiddle encyclopedia articles (including the article images and facts) can be freely used under Attribution-ShareAlike license, unless stated otherwise. Cite this article:
Adhesive bandage Facts for Kids. Kiddle Encyclopedia.