The Admiral Theater is a movie theater and historic landmark in the North Admiral neighborhood of West Seattle, Washington, United States. It was originally a second-run theater, but has since switched to showing new releases.

The building itself dates back to 1919 and was originally known as the Portola Theater. With a somewhat nautical theme, the face of the theater sported two portholes. The Portola was at the forefront of theaters for its time. The screen was equipped with a lighting system, able to enhance the otherwise black and white scenes with gentle hints of color as needed. Films were silent at the time as well, but theater organ musicians added an extra musical touch to the first-class cinematic experience here. Seeing the latest film would only cost around 20 to 25 cents for an adult.

Eventually the Portola Theater was bought in 1938 by John Danz, it was then remodeled and renamed to the Admiral Theater, a name chosen by popular vote courtesy of West Seattleites and has stuck to this day. The Admiral Theater officially opened January 22, 1942, this 802-seat theater was designed by the noted cinema architect, B. Marcus Priteca. Eventually, the theater was sold by John Danz to Cineplex, finding itself in a state of neglect and losing money quickly, the theater announced it would be closing its doors. However, the Historical Society of Seattle got involved to help save the building, leading to the establishment of the theater as a landmark. In 1992, the Admiral was ready to reopen and continue business as a second-run theater. The Admiral has been sold as of June 2008, to Faraway Entertainment, a group out of Bainbridge Island. Admiral Entertainment, LLC manages the movie house.

Alongside showing movies, the Admiral has been the host of performers, shows, and special events. For over ten years, The Rocky Horror Picture Show was performed regularly, with the last showing taking place on November 1, 2014. The Admiral Theater was also frequented by J. P. Patches, a prominent local clown. The theater also hosts the Mommy Matinee, held regularly as an opportunity for parents and guardians to bring in their young children to watch a movie, but without the stress or worry of disrupting fellow viewers. 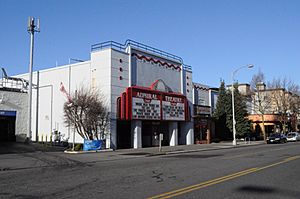 Exterior of the theater, as seen from California Avenue

Having expanded upon the Portola, the Admiral kept the original nautical theme and even expanded upon it over time. The auditoriums are labeled by "pier", green seahorses accompany the exit signs, the employee's room is known as "the crew's quarters", and the two portholes once decorating the exterior of the Portola can now be viewed just above the Admiral's lobby. Artwork brings the walls to life as well, entering the theater, you are greeted by a 1942 mural of George Vancouver behind the concession stand, spanning from floor to ceiling. In 1997, the theater added another nautical twist by hiring muralist, Jeff Greene, to paint an underwater scene in one of the auditoriums. These scenes are still visible with potential to be restored.

The theater has gone through many renovations and changes over the years. It didn't stop after the initial remodel, mentioned previously, to prepare for the new Admiral Theater grand opening in 1942. Then, in 1973, the Admiral was split into two auditoriums in hopes of expanding opportunity and draw in bigger crowds. As time went on, in 2017, the theater opted for another renovation, the largest one yet, turning the two theaters into a total of four. This build included an update with luxury seating, a higher quality sound system, and 3D effects to name a few. Hosting a grand reopening on March 22, 2017, the Admiral Theater continues to provide West Seattle with a host of first-run movies and a history, deeply rooted in the community it serves.

All content from Kiddle encyclopedia articles (including the article images and facts) can be freely used under Attribution-ShareAlike license, unless stated otherwise. Cite this article:
Admiral Theater Facts for Kids. Kiddle Encyclopedia.