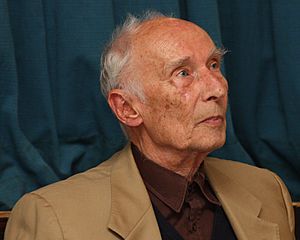 Adolf Holl (13 May 1930 – 23 January 2020) was an Austrian Catholic writer and theologian. He was born in Vienna. He became a priest in 1954. He served as chaplain of the University of Vienna and as a lecturer in its department of Catholic theology. Because of clashes with church officials, he was suspended from his teaching and priestly duties in 1973. He wrote many books, including Jesus in Bad Company and The Last Christian: A Biography of Francis of Assisi.

All content from Kiddle encyclopedia articles (including the article images and facts) can be freely used under Attribution-ShareAlike license, unless stated otherwise. Cite this article:
Adolf Holl Facts for Kids. Kiddle Encyclopedia.