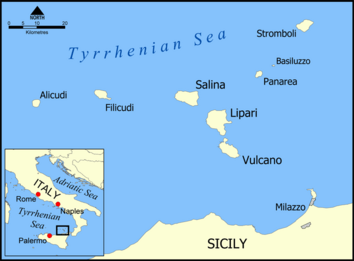 Map of the islands

The Aeolian Islands is an archipelago of seven islands, which are north of Sicilly. The islands are of volcanic origin. About 13.000 people live on the islands, which belong to Italy. The biggest of the islands is Lipari. For this reason, the islands are also known as Lipari islands. There are two active volcanoes on these islands, called Stromboli and Vulcano. Stromboli is the only volcano that is active all the time. The volcano on Vulcan is called Grande Fossa. It is dormant or slightly active. It is considered to be one of the most dangerous volcanoes in Europe. 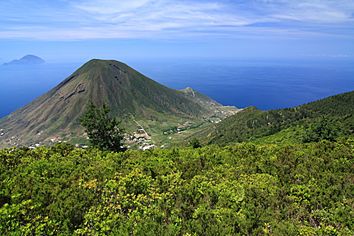 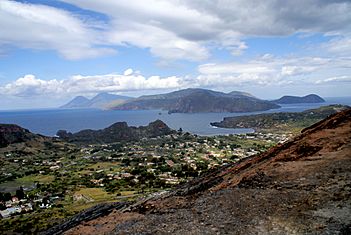 The Aeolian Islands: standing on Vulcano, Lipari in the middle, Salina at the left, Panarea at the right.

The islands have been inhabited since the Stone Age. They were important for the obsidian that can be found there.

All content from Kiddle encyclopedia articles (including the article images and facts) can be freely used under Attribution-ShareAlike license, unless stated otherwise. Cite this article:
Aeolian Islands Facts for Kids. Kiddle Encyclopedia.