The Afan Forest Park (formally and locally known as Afan Argoed Country Park) is a 48-square-mile (120 km2) forest park in Britain. It is set in the Afan Valley in Neath Port Talbot, in south Wales. It is well known for its mountain biking and hiking or hillwalking trails. It is situated seven miles (11 km) from Junction 40 of the M4 (the Port Talbot turn). 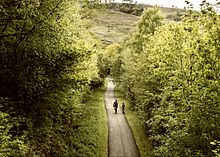 As the A4107 meanders through the steep sided valley it is easy to understand why this valley has been developed as a premier Mountain Bike riding venue in the United Kingdom. The Forest Park also has nine waymarked walking trails, ranging from a 30-minute amble to a 3-4 hour ramble. There are also miles of public rights of way to make up your own walks. As well as mountain biking, there is also a network of 25 miles (40 km) of disused railway lines which can be used for walking and cycling. These are called the Family Routes, or the Low Level Cycleway. These also form a link between the mountain bike trails.

The Forest Park Centre has camping facilities, with campsites with a shower block and toilet block which can also be used by other visitors. In addition to these basic facilities, the Centre also offers a cafe, small local museum on mining, bike shop and a gift shop.

In 2002, Afan Forest Park was officially twinned with the C.W.Nicol Woodland Trust in Kurohime in the Nagano prefecture of Japan. In Afan Forest Park, 'Kanji Wood' was developed on three kanji characters; human, forest and life and landscaped with Japanese trees, shrubs and sculptures.

The Forest Park runs an extensive schools program with its Education Ranger and also organises adult education from the Study Room at the Forest Park Centre, which is available for private groups. They also do an annual program of walks and activities and have a wildlife puzzle trail for families. Afan Forest Park Visitor Centre can supply information on all facilities within the Forest Park.

Developed in 2006, this is a 300-seat outdoor theatre for all sorts of drama, music, art workshops etc. and is available for hire.

The Penhydd trail was built by a group of enthusiasts from the local mountain bike club. It's a 22 km loop. This trail was voted as the trail to ride before you die by What Mountain Bike Magazine in 2004.

With the success of the Penhydd Trail, the Forestry Commission saw how popular mountain biking was becoming so the Wall trail was built. This is a 24 km mainly single-track loop. It is memorable for its cliff top views of the River Afan. The Graveyard section and the final descent of the Wall have been well reviewed.

This is a 6 km single-track climb and downhill. There is usually transport available for downhill riders at weekends, from the Glyncorrwg Mountain Bike Centre. The whole trail is 15 km long and has recently been the focus of most new trail building activity. A new section, the NPower Renewables Energy Trail, was opened on 12 October 2007.

The newest trail in the valley. This is a 46 km long loop, sharing the same initial climb as White's Level. It is renowned for the stunning views from the horizon line. The Jetlag section is well known for its high difficulty. There are also two 'shortcuts' on the route for riders who are not ready to attempt the whole 46 km.

This is a high level link that connects both The Wall and White's Level.

Lists of places to stay in and around the park can be found at the Afan Forest Park website.

Afan Forest park was named in the top ten places in the world to "ride before you die" by What Mountain Bike Magazine. Other destinations named included Whistler, Canada.

Large numbers of larch trees infected with Phytophthora ramorum have been felled, to be replaced by mixed species for timber production.

All content from Kiddle encyclopedia articles (including the article images and facts) can be freely used under Attribution-ShareAlike license, unless stated otherwise. Cite this article:
Afan Forest Park Facts for Kids. Kiddle Encyclopedia.