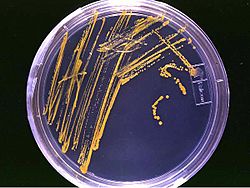 An agar plate streaked with microorganisms isolated from a deep-water sponge. Individual colonies may be seen at the center right. 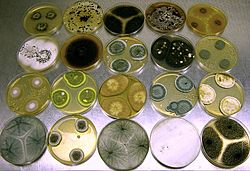 An agar plate is a Petri dish that contains agar and some nutrients (food for the microorganisms). It is used to grow microorganisms. For example, a blood sample of a patient may be put on agar plate, to let the bacteria that made the patient sick grow. These bacteria can then be identified using a microscope to let the doctor choose the appropriate treatment of the patient.

When microorganisms grow on the agar plate, they form colonies. Each colony has similar genetic characteristics.

There are many types of agar plates that are used, but the two main types are defined and undefined. An undefined plate's nutrients aren't exactly known, but everything in a defined plate is accounted for.

All content from Kiddle encyclopedia articles (including the article images and facts) can be freely used under Attribution-ShareAlike license, unless stated otherwise. Cite this article:
Agar plate Facts for Kids. Kiddle Encyclopedia.