Aggieville is the name of six square blocks consisting of college-age oriented bars, restaurants and shops in Manhattan, Kansas, United States. Aggieville is most famous for its bars and restaurants, which usually sport Kansas State fans before a game.

Before 1898, students at the Kansas State Agricultural College (now Kansas State University) had to purchase their textbooks downtown, which, in the age before the automobile, was inconvenient due to distance and often, mud-soaked roads. The college decided to build a student bookstore and dining facility closer to campus, but it was shut down in June 1899 after a political upheaval in the college's Board of Regents. That September, a group of students started the Student Co-Operative Association and bought the bookstore.

That bookstore would serve as the cornerstone for a developing shopping district that catered specifically to college students. What was once a sparsely populated collection of houses was fast becoming a shopping center with restaurants, bars, and shops. Over time, the area would come to be called Aggieville, after the school's mascot, the Kansas State Agricultural College Aggies. Even when the school's mascot was changed to the Kansas State Wildcats, the name Aggieville stuck.

After World War I, Aggieville experienced enormous growth. Trolley lines were built, and later paved over during the car boom of the 1940s. In the 1950s, bars and restaurants began to develop and over the next 30 years, Aggieville would become known as an entertainment and dining district.

With the passing of the National Minimum Drinking Age Act of 1984, Aggieville saw a slight dip in business at its bars and saw more shops and restaurants move in. However, with the hiring of Jon Wefald as Kansas State University's new president in 1986, enrollment at the college nearly doubled over the next 20 years and with the increased student population, Aggieville saw a new boom in all types of businesses: shops, bars and eateries.

Aggieville was home to riots in 1984 and 1986, some of the earliest collegiate sports riots in the United States. In 1998, Aggieville played host to a massive celebration after the team's first defeat of Nebraska since 1969, which included the tearing down of the goal posts and dragging them, en masse, to the rooftop of Rusty's Last Chance.

Aggieville also plays host yearly to the "Little Apple New Year's Eve" celebration, where people fill the streets to welcome the new year. At midnight, a brightly lit apple is dropped from the Rally House (formerly Varney's Bookstore) marquee. The celebration brought an estimated 10,000 people to Aggieville on December 31, 2005, and was featured live on Fox News.

Every year, Aggieville plays host to its annual "St. Patrick's Day in the Ville" celebration that includes restaurants serving Green Eggs and Ham, a road race and family fun run, and a parade. A week before, however, Aggieville hosts something entirely different. This event is known as "Fake Patty's Day."

Since 2007, Aggieville has been the center of the celebration of "Fake Patty's Day", a day where people from all over come to Manhattan for a day full of drinking in honor of St. Patrick's Day. Since that day usually happens during Spring Break, college students decided to make up their own St. Patrick's Day on a different day.

Recently, the "Fake Patty's Day" celebration has attracted increasing debate following the community's disapproval resulting from the prevalence of criminal offenses associated with the event, such as underage drinking, assaults and batteries, public urination, noise complaints, driving under the influence, littering, amongst other resulting nuisances. The Manhattan City Council has been presented with a number of proposed city ordinances aimed at controlling the event but none have passed due to public debate, objections from the local tavern owners, and legal questions associated with such action.

A large part of the unique flavor of the Aggieville scene stems from the multitude of locally owned and operated bars, eateries and shops located in the district, with over one hundred total businesses. 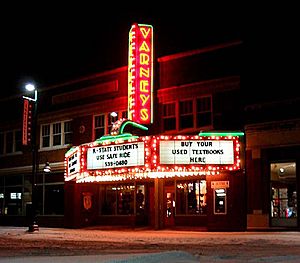 Varneys was an iconic store located at the west end of Aggieville.

Located at 16 N. 12th St., Manhattan, KS 66502, Auntie Mae's Parlor is a popular bar in Aggieville founded in 1930, after being converted from a plumbing shop into a speakeasy. The shop's owner, Dora Mae, served alcohol to the residents of Manhattan and passers-by for four years during the Prohibition era, until the bans were ultimately repealed. In 1974, the bar was reopened in Mae's honor. Now, customers at Auntie Mae's can find live entertainment in the form of music, comedy, and other performing arts. Additionally, the main bar is still located in the basement of the building, maintaining a rebellious speakeasy atmosphere.

Aggieville contains a diverse combination of shops and businesses which are nearly all aimed at the college-age demographic. Since Aggieville's first shop, a laundromat, opened in 1898, local businesses have catered to students at the nearby university.

All content from Kiddle encyclopedia articles (including the article images and facts) can be freely used under Attribution-ShareAlike license, unless stated otherwise. Cite this article:
Aggieville Facts for Kids. Kiddle Encyclopedia.