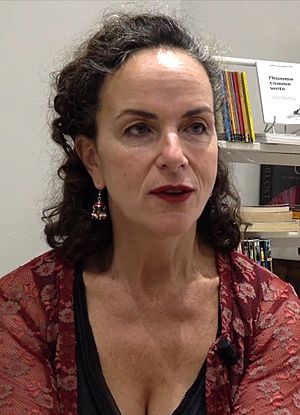 Desarthe was born 3 May 1966 in Paris. She is the daughter of the paediatrician and writer Aldo Naouri and married to moviemaker Dante Desarthe. Her brother is the opera singer Laurent Naouri. She studied English literature.

She started her career as a translator. In 1992, she published her first novel. She became a prolific writer of children's books. In 1996 she was awarded the Prix du Livre Inter for her second novel Un secret sans importance. Her most successful novel Mangez-moi has been translated into 15 languages. One of her more recent novels, Dans la nuit brune, received the Prix Renaudot des Lycéens in 2010. Her novels are published in France by Éditions de l'Olivier and in the UK by Portobello Books.

All content from Kiddle encyclopedia articles (including the article images and facts) can be freely used under Attribution-ShareAlike license, unless stated otherwise. Cite this article:
Agnès Desarthe Facts for Kids. Kiddle Encyclopedia.