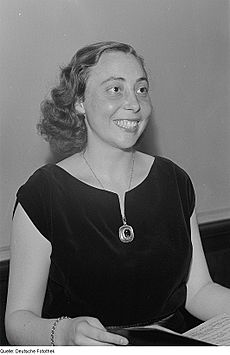 Agnes Giebel (10 August 1921 – 24 April 2017) was a German classical soprano. She was born in Heerlen, the Netherlands. She studied at the Folkwang Hochschule in Essen and made her first public appearance as a singer in 1947. Her career lasted until the 1990s during which she established a wide-ranging discography. Giebel's career was based on the works of music such as cantatas, oratorios, passions, and masses and was thought to be one of the greatest Bach singers of her generation.

All content from Kiddle encyclopedia articles (including the article images and facts) can be freely used under Attribution-ShareAlike license, unless stated otherwise. Cite this article:
Agnes Giebel Facts for Kids. Kiddle Encyclopedia.